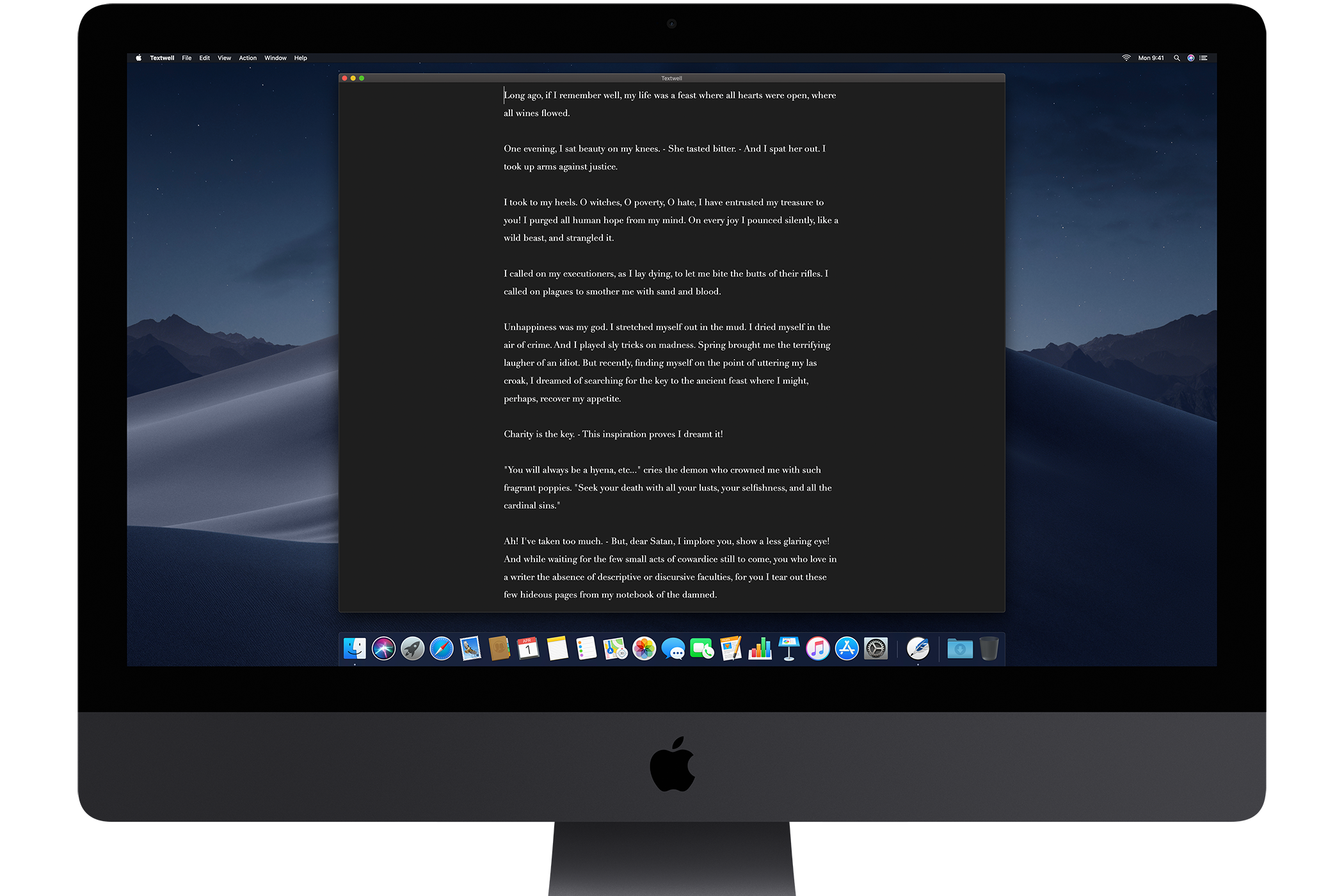 Textwell is a multipurpose textbox which can be used for any writing tasks such as emailing, blogging, searching, coding, authoring, posting to SNS, and so on. Unlike other text editors or notepad apps, Textwell doesn't have features for filing and styling. Instead, Textwell acquires real simplicity and extensibility with its powerful JavaScript-based action mechanism, automatic history storing, flexible cloud syncing, and fulfilling continuity features. 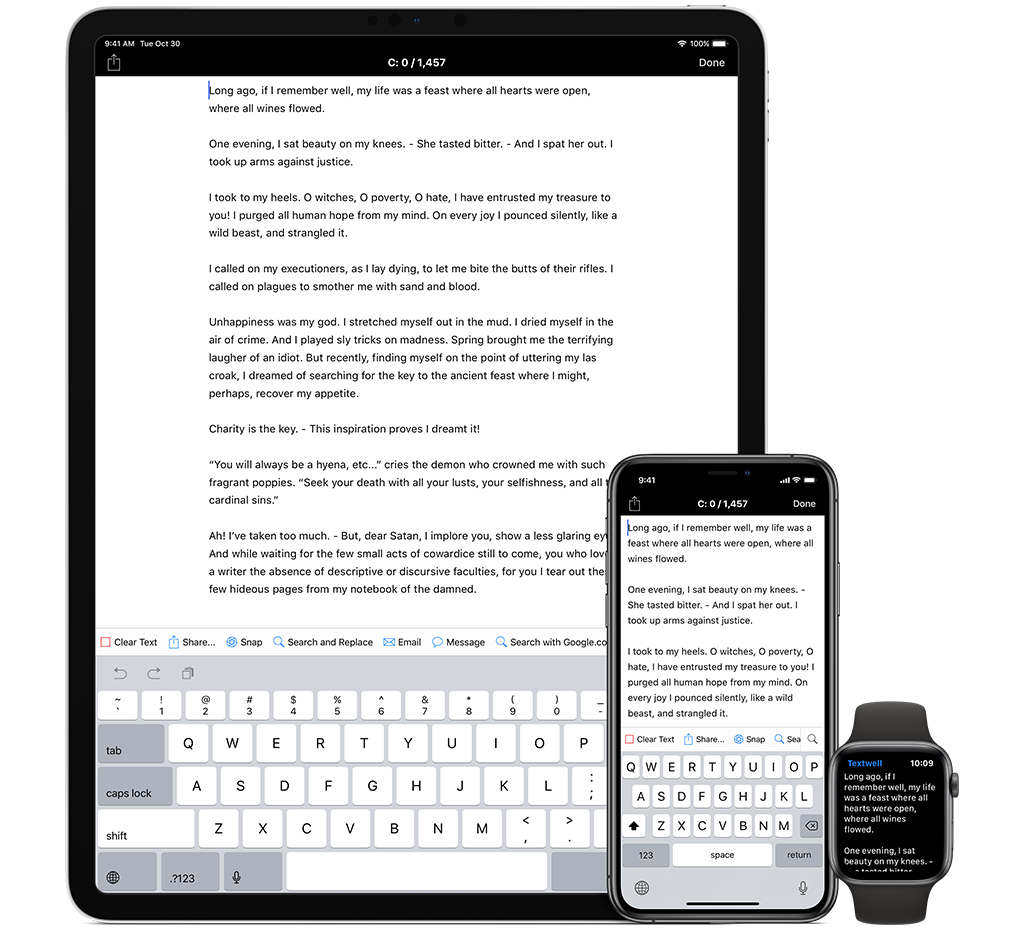 We believe that, within iOS, there should be a super simple writing tool as your starting point which absorbs any contexts and assists your following actions. That's why we made Textwell. 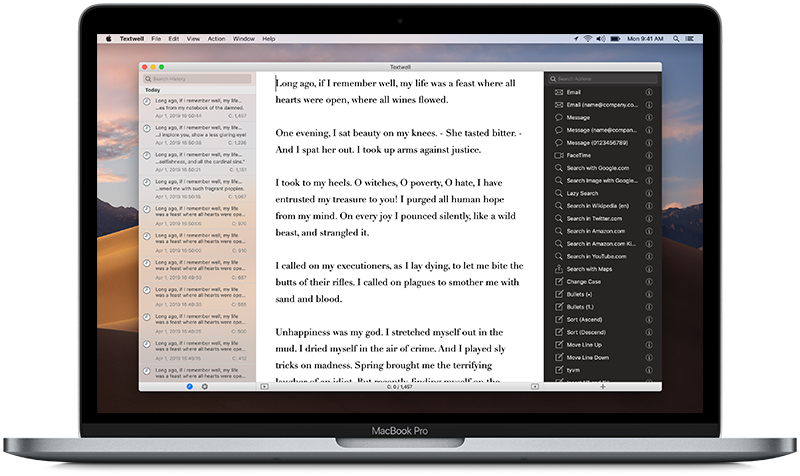 Finally the experience comes to your Mac. Textwell for Mac has been designed with the same concept and features as that iOS version has, but it is much faster and easier to use in the big screen.

Despite writing is the most basic and frequent activity that you do on your computer, why do you need to open different apps for each time to start typing? Despite ideas always come to you before you decide what you do with them, how do you know the best place to jot them down among 100 apps on your device?

The key concept of Textwell is that it's for nothing but just jotting. For the simplicity, it doesn't have features for styling text or managing multiple notes, but It is always ready to start writing. This could be enough reason to use Textwell for those who demand a super simple notepad which has no functional complexity or visual clutter. 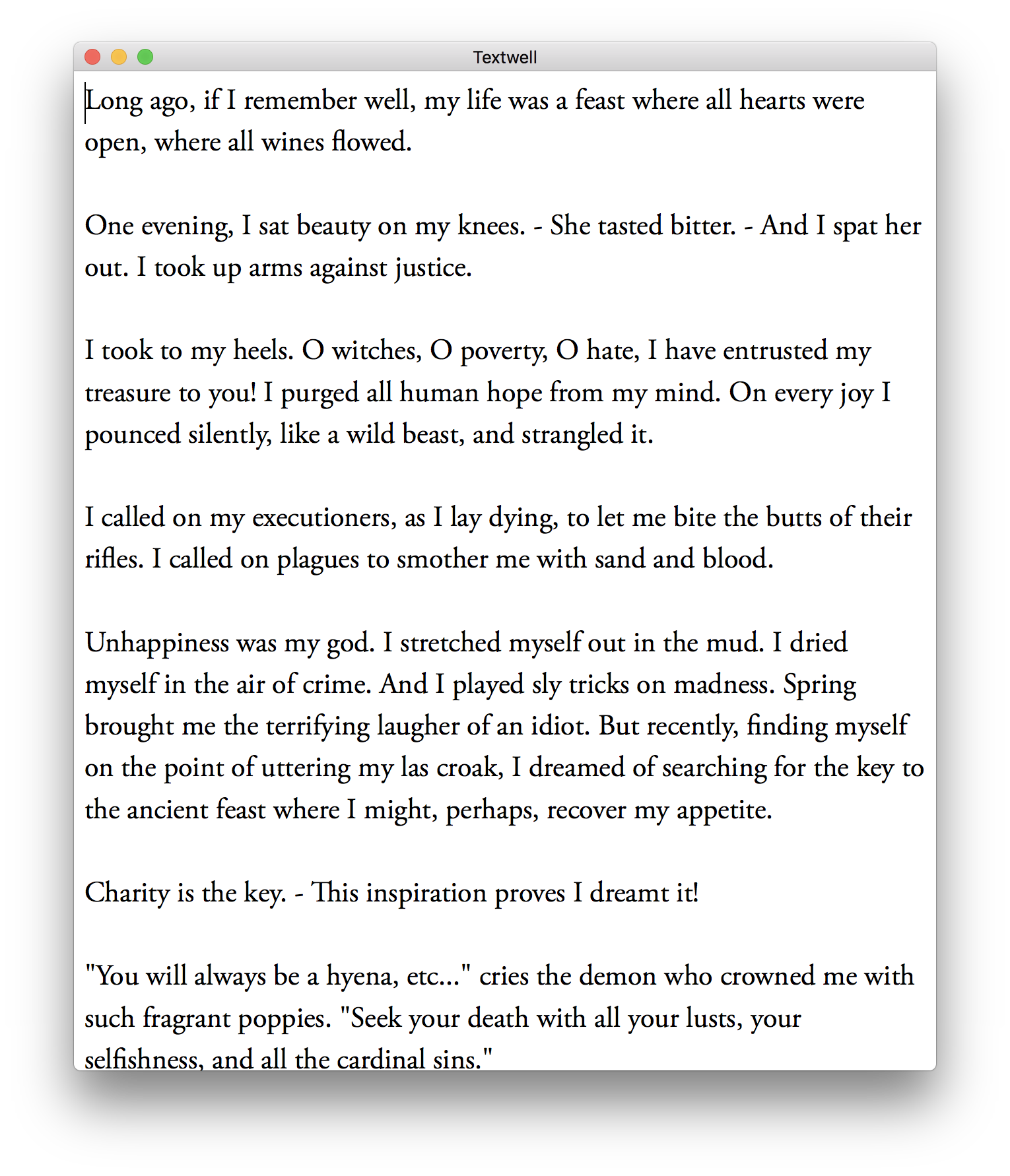 So, Textwell is just like a single sheet of paper. You will write, then erase, and write again on the same sheet.

However, it is a smart sheet. The text can be modified, routed, or shared by variety of actions in plenty of ways. The text will be automatically stored as history. Also, you will find that the singleton is ubiquitous because it appears on all your iOS/Mac devices, and the content will be synchronized.

Using Siri to add a note on Textwell

On iOS, you can use Siri to append a note to Textwell. If you say "Note on Textwell," then Siri will ask what you want to add, or you can say "On Textwell, note that she is fine" to add a note by single sentence.

Actions are small JavaScript-based programs that are to handle your text for many purposes such as sending, previewing, converting, inserting, transforming, routing to other apps, etc. 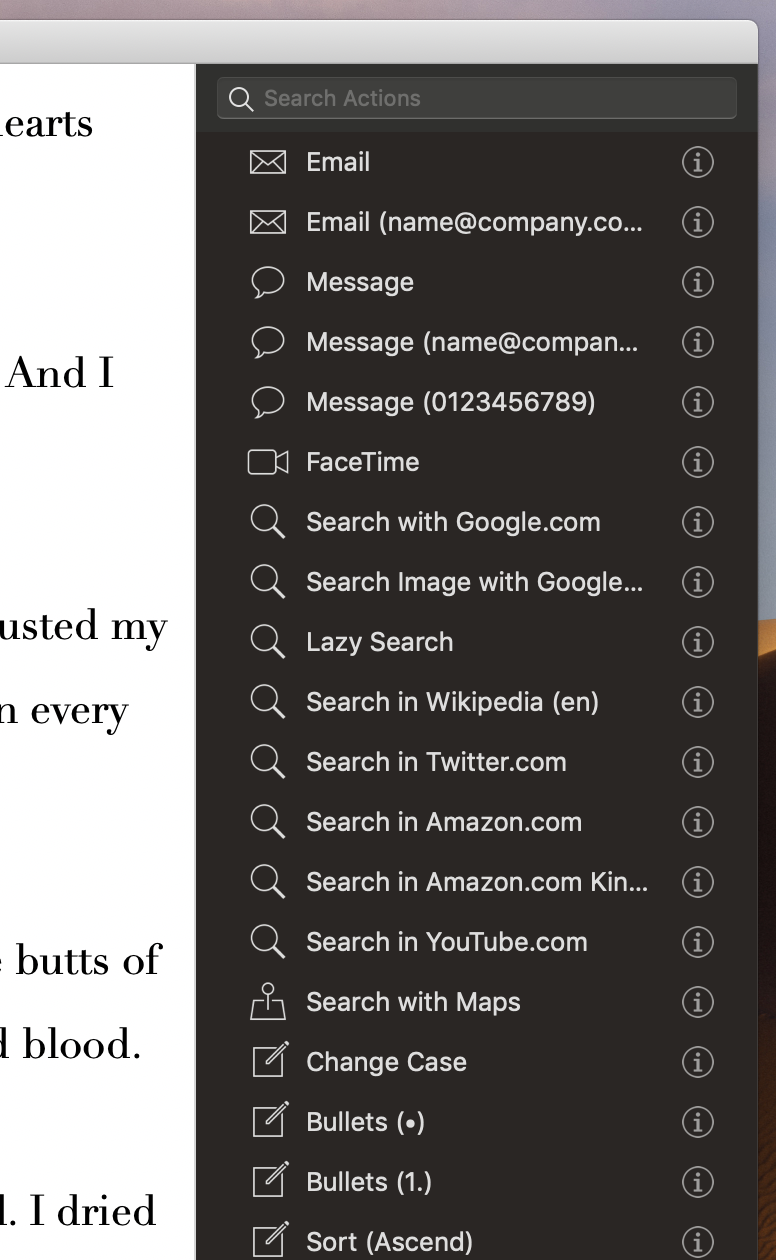 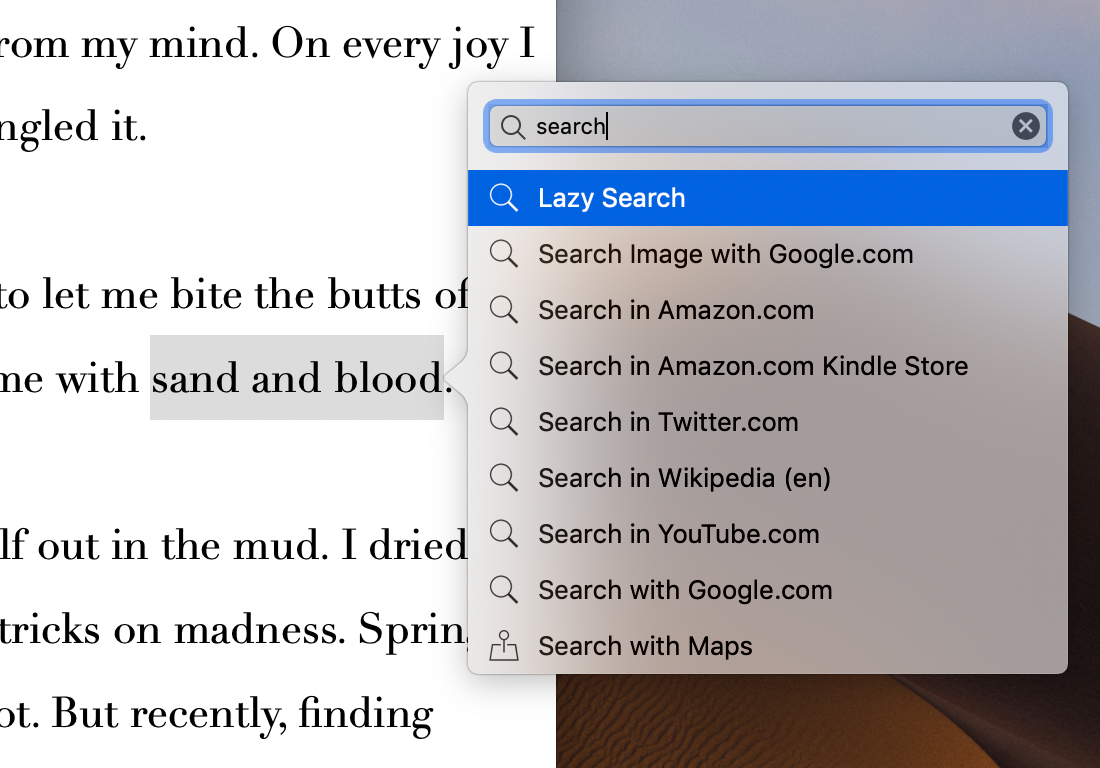 Because Textwell is just a single textbox actually, its high customizability is the premise of convenience. Textwell has some pre-installed useful actions, but they are no more than examples. You can import more actions from the official action library, and you can even create ones by yourself. By its scriptability, Textwell accepts variety of inputs and outputs in your ways. It means that Textwell will be a console which is connected to other apps and the Internet. Actions are run in the built-in web view translucently. Your text can be modified, sent to other apps, posted to web apps on the Internet, or processed with external programs for getting the results back to the text view. Check the list of the major official actions to know the variety of things you can do with Textwell. 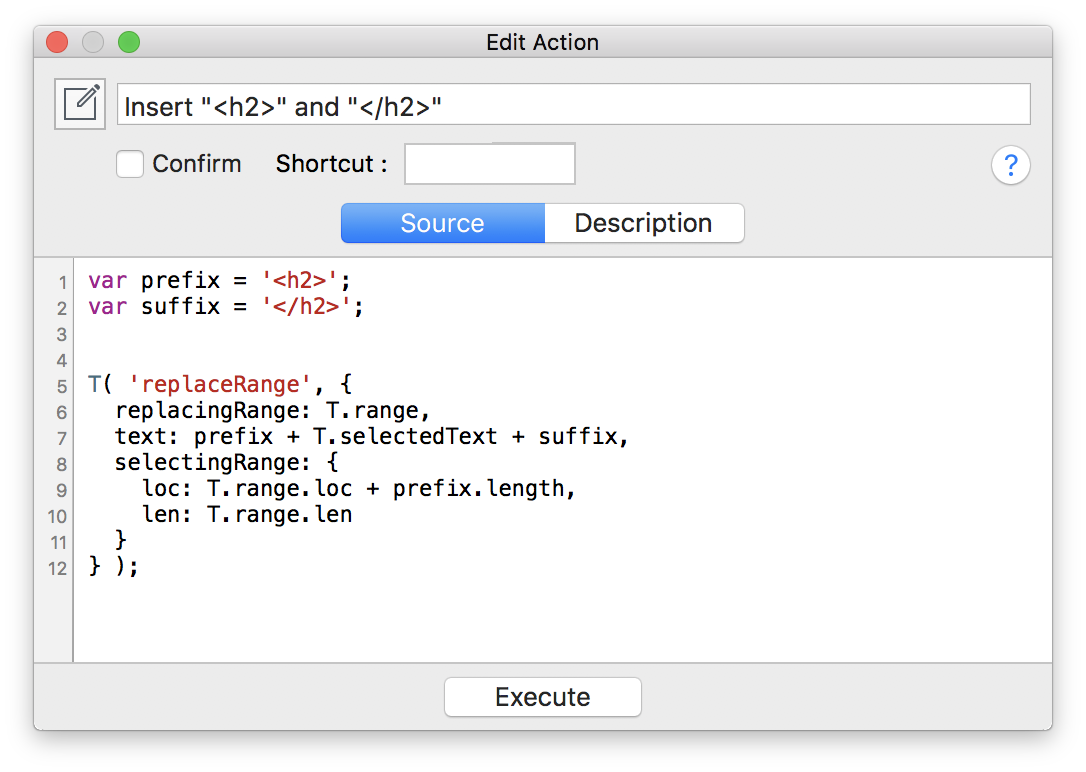 An action usually works on both Textwell for iOS and for Mac. JavaScript sources for actions will be compatible on both platforms because they run on the same mechanism.

Adding new actions or modifying existing actions to make them fit different user contexts is truly expected in the design concept of Textwell. Learn more about making actions from the Action Scripting Reference.

History is a collection of previous contents of the main text view. Textwell automatically saves the content into history by appropriate timing, so that you can search and take it back some time later.

For example, Textwell automatically stores the content into history when you execute an action such as "Tweet," which post the text to Twitter. It means that some days later you can find and restore what you have posted. For example, Textwell automatically stores the text when you open a text file to replace current content. After some days you are still able to retrieve the content which you had on the text view right before you opened the text file. 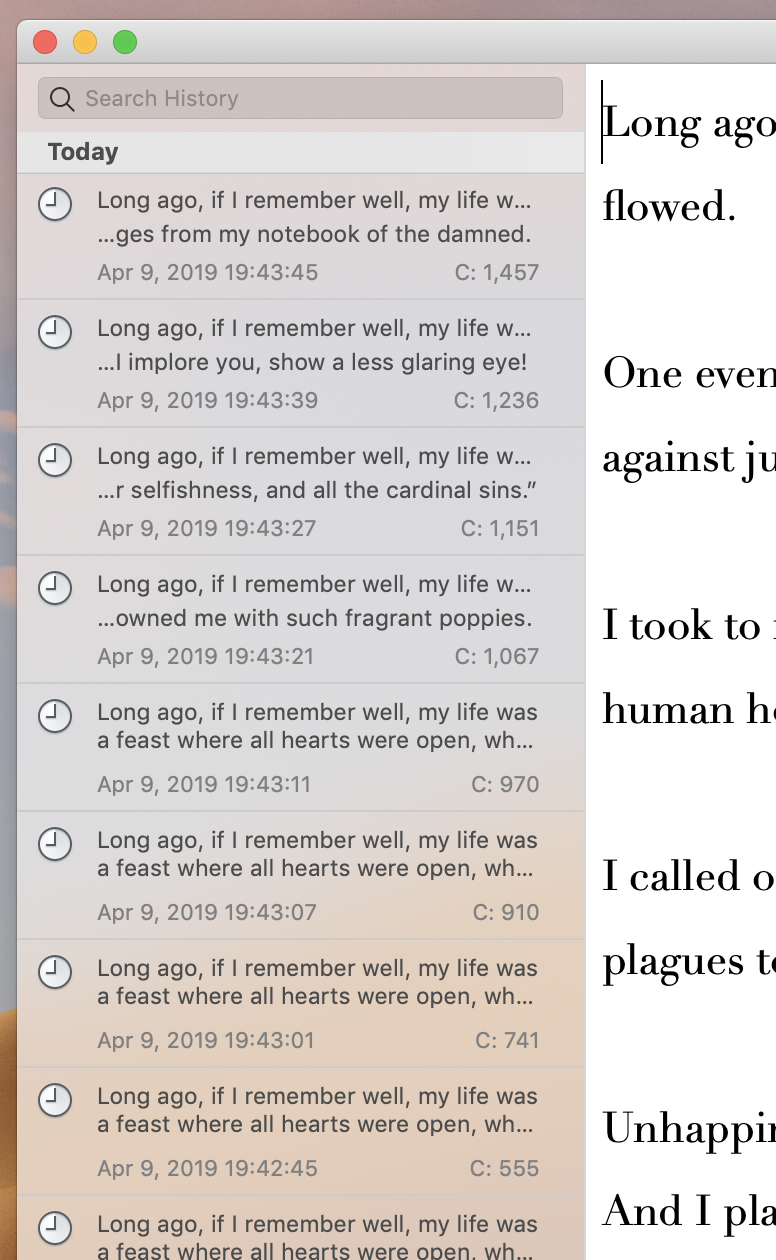 Instead of filing multiple notes, Textwell keeps making history of its content as an alternate way to have revisions. History is, however, designed for logging what you write on the text view, and it is not for explicitly saving text data on the disk. To perpetuate your text as a file, you should route the content to other apps or do "Snap" the content onto your iCloud storage.

Textwell uses iCloud to synchronize current text across your devices. The synchronization will be occurred automatically, so that you may feel you have a shared single textbox among every Textwell on your iPhone, iPad, iPod touch, or Mac. 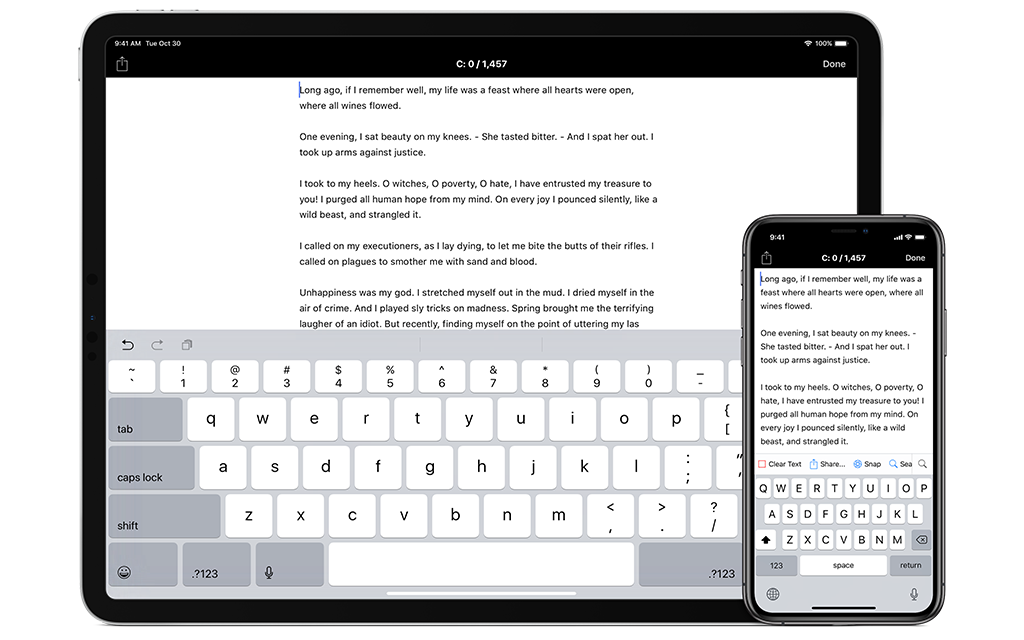 Your text content can be saved and stored as "snaps" also. While history is recorded automatically and implicitly, you can snapshot current content by arbitrary timing, this feature is called "Snap." Snapped contents are saved on your iCloud and can be shared with your devices. In addition, you can export text or collection of actions onto your iCloud Drive, and then import them from other devices.

By Handoff, you can continue working on your writing with iOS devices and Macs back and forth.

Handoff via Dock on Mac

Handoff via app-switching screen on iOS

You can preview the current content of Textwell anytime with the widget via lock screen, home screen, or search screen.

Previewing with widget on iOS 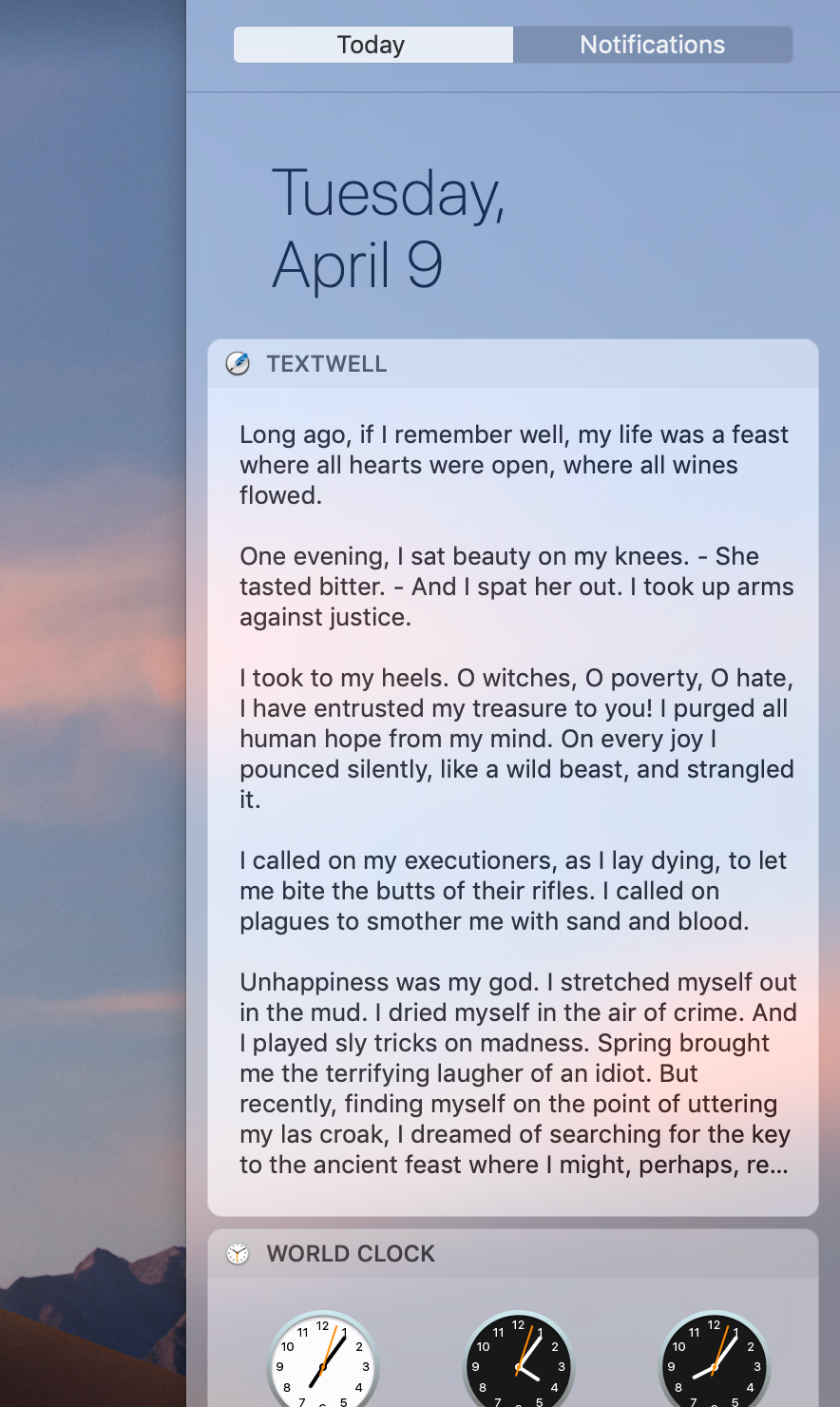 Previewing with widget on Mac

For iOS, apps that support extension provide the action sheet which includes "Add to Textwell." You can pick and insert some text from those apps to Textwell without switching apps.

"Add to Textwell" extension on iOS

For Mac, apps that support share extension provide sharing menu, and "Textwell" can be chosen. You can pick and insert some text from those apps to Textwell without switching apps. 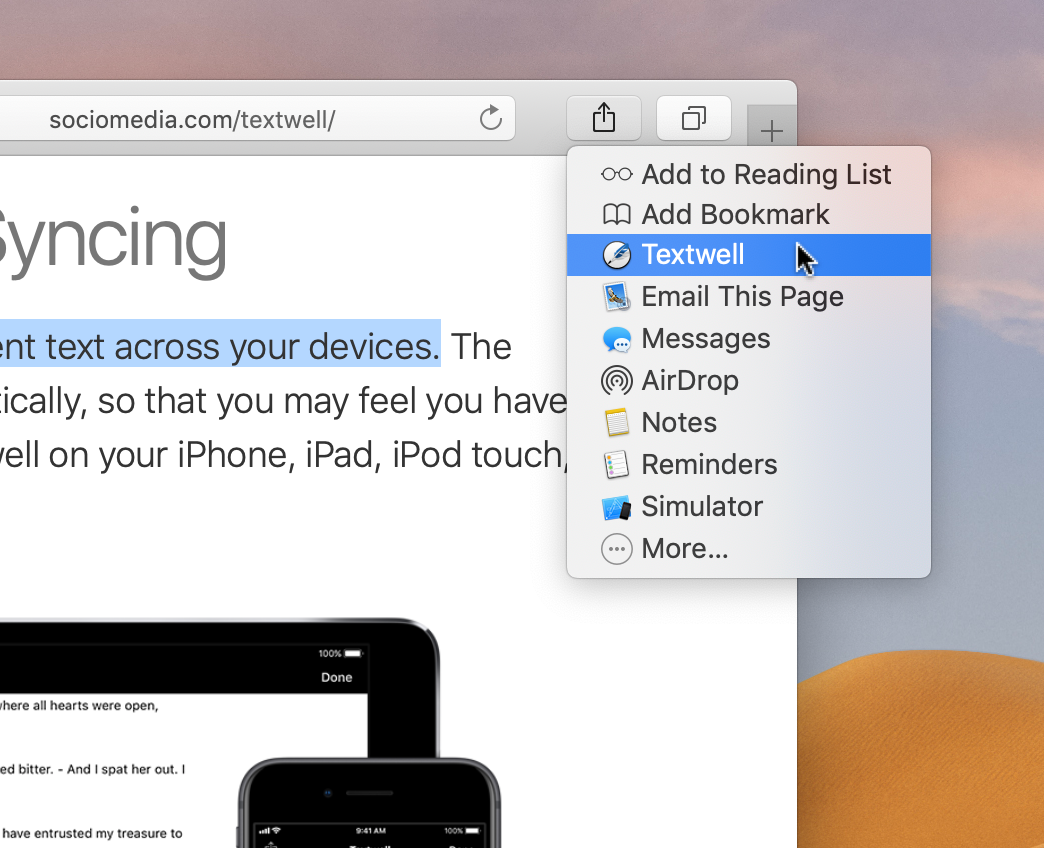 Textwell provides an iMessage app for iOS. With Textwell iMessage app, you can pick a line (or lines) from Textwell directly on your iMessage conversation screen and send it.

Textwell for iOS supports Apple Watch. Anytime you can read your text content that is synchronized with iPhone. Furthermore, the Textwell app for Apple Watch allows some ways of text input - adding time stamp, location stamp, line break, clear all, and of course, dictation. Textwell app can be launched directly from watch faces by tapping its complication icon.